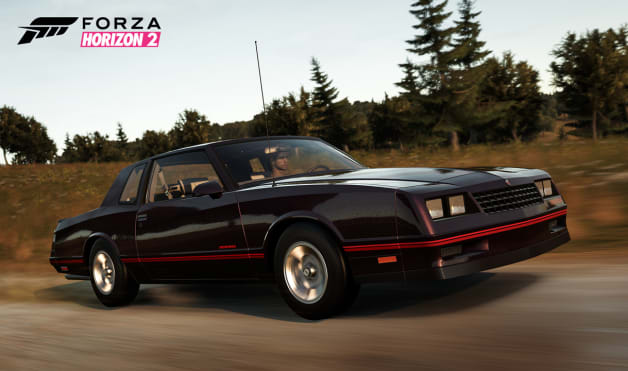 The latest car pack for Forza Horizon 2 is hitting Xbox Live today, giving Xbox One owners a shot at six new vehicles that date back to 1970. Leading the charge in the hearts and minds of the Autoblog staff is, of course, the 1988 Chevrolet Monte Carlo SS, one of the most 80s-tastic performance coupes of its time.

Chevy's 80s-era NASCAR representative is joined by another General Motors performance two-door, in the form of the 1970 Buick GSX. Complete with a 455-cubic-inch V8, the GSX could best be thought of as the grandpappy to the iconic GNX of the late 1980s.

Crossing the pond, we have a trio of offerings from the United Kingdom, with the 2002 Lotus Esprit V8, the redesigned, aluminum-intensive 2014 Land Rover Range Rover Supercharged and finally, the 2015 McLaren 650S. The mid-engined offerings should be a riot on the winding roads of Forza Horizon 2's European locales, while the Range Rover should make cross-country efforts an absolute breeze. Finally, virtual wagon lovers will be able to enjoy the 2015 Audi RS6 Avant and its combination of Quattro all-wheel drive and a twin-turbocharged V8.

As per usual, this latest car pack will be available to gamers for $5 while season pass owners will score the sextet of vehicles for free. Scroll down for a video of the new offerings in action, as well as the official press release from Turn 10 Studios.